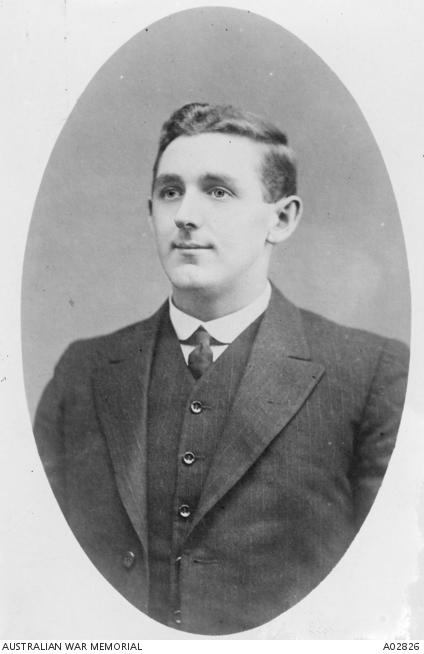 The man and his donkey

John Simpson Kirkpatrick, affectionately known as “the man and his donkey”, was born on the 6th of July 1892 in South Shields, England.
He landed at ANZAC Cove at 5 a.m. on the 25th of April 1915 and was mortally wounded in Shrapnel Gully, near the mouth of Monash Valley, on the 19th of May 1915 at the age of 22.

During the 24 days he spent at ANZAC he operated as a sole unit with his beloved donkey/s and is credited with saving the lives of probably hundreds of men.

He has become a part of the ANZAC folklore and though recommended for the Victoria Cross, twice, and the Distinguished Conduct Medal was never decorated for his actions.

The first 24 hours at ANZAC
“C” section rowed ashore from the transport “Devanha”. Just before dawn, at about 5.00 a.m. on Sunday April the 25th 1915, they leapt from the boat and waded ashore.
Simpson was the second man in the water. The first and third men were killed. Casualties on the first day were appalling. Of the 1500 men in the first wave, 755 remained in active service at the end of the day. The remainder were killed or wounded. Those that did remain were badly effected by the shortage of food and particularly water in the sub-tropical sun.*1

There was also a shortage of stretchers, medical equipment and supplies. Stretcher parties were reduced from 6 men to 2. They improvised as best they could and worked all day tending to the wounded and carrying them down to the Casualty Clearing Stations on the beach at ANZAC Cove.

A primitive collecting post was established using the cover of the overgrown vegetation beyond the beach. Capt. Douglas McWhae of ‘C’ Section wrote of the landings “The Red-Cross flag was put up after a time. The three sections were going for all they were worth… they had iodine and field dressings; all splints were improvised using rifles and bushes. They were terrible wounds to deal with.”

By dawn on the second day the Anzac’s were holding onto a 500 acre piece of ground. The Turks held the high ground and looked down into the ANZAC position at almost every angle. Stretcher parties were under constant rifle and artillery fire.

Several donkeys were landed and some had been deserted and were grazing in the wild overgrown gullies. Simpson, having already carried two heavy men down from the front lines, responded to a call from a wounded man. He, who had by this time been reported missing, saw a donkey grazing nearby and decided to use the donkey to help carry him to the beach.
The donkey responded to the sure touch of the friendly man with the experience gained at Murphy’s Fair as a young man back in South Shields.

There was no saddle, stirrups or reins. Simpson made a head stall and lead from bandages and field dressings for this first trip. He lifted the wounded man onto the donkey and held onto him as he guided the donkey to the beach.

From this day on Simpson decided to act as an independent unit. He did not report back to ambulance headquarters for instructions and for the first 4 days was technically a deserter until his CO (Commanding Officer), seeing the value of his work, agreed to turn a blind eye and approved his actions.
Later he made a saddle from bags and blankets and used ropes for the head stall and lead. Some of his friends made a small bell from the nose cone of a shell.

The daily routine
Simpson and his donkey would make their way up Shrapnel Gully, the main supply route to the front line, into Monash Valley and onto the deadly zone around Quinn’s Post where the opposing trenches were just 15 yards apart.
To the left of Quinn’s Post was Dead Mans Ridge, held by the Turks, from where they were able to snipe right down Shrapnel Gully.

Simpson would start his day as early as 6.30 a.m. and often continue until as late as 3.00 a.m. He made the one and a half mile trip, through sniper fire and shrapnel, 12-15 times a day. He would leave his donkey under cover whilst he went forward to collect the injured. On the return journey he would bring water for the wounded.

He never hesitated or stopped even under the most furious shrapnel fire and was frequently warned of the dangers ahead but invariably replied “my troubles”. 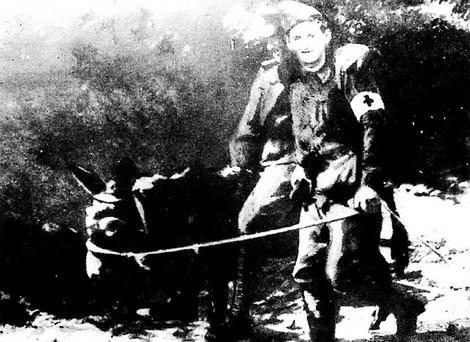 It is unclear whether he used one donkey or several though we do know that he used several names, “Murphy”, “Abdul”, his favorite “Duffy” and even “Queen Elizabeth”. He certainly only used one donkey at a time as the terrain was too restrictive to use more.

The need for fodder led him to the only source, which was at the foot of Shrapnel Gully, in the form of the 21st Kohat Indian Mountain Artillery Battery*2. The Indians had brought mules to haul their artillery and had brought plenty of fodder. Simpson set up camp with them, slept and ate with them and was idolized by them. The Indians called him “Bahadur” which means “the bravest of the brave”. To the other troops he was known as “Scotty”, “Murphy”, “Simmie”, and generally “the man with the donkey”.
General C. H. Brand*3 described Simpson with his donkey as he was often seen.
Almost every digger knew about him. The question was often asked : “Has the bloke with the donkey stopped one yet ?” It seemed incredible that anyone could make that trip up and down Monash Valley without being hit. Simpson escaped death so many times the he was completely fatalistic. He seemed to have a charmed life.
Simpson the man
The Australian Dictionary of Biography records Simpson as “a typical digger; independent, witty, warm-hearted, happy to be indolent at times and careless of dress.”
Army records describe Private Simpson J, number 202, of fair complexion, brown hair, blue eyes, 5ft 8in tall, 12 stone and of solid build.

His friend Andy Davidson described him as “a big man and very muscular, though aged only 22 and was selected at once as a stretcher bearer… he was too human to be a parade ground soldier, and strongly disliked discipline; though not lazy he shirked the drudgery of ‘forming fours’, and other irksome military tasks” and “he was very witty, and inclined to the lazy, very popular, liked a pot or two but did not drink to excess, careless of dress and was a handful to Sgt. Hook way, his Section Sergeant.”

Simpson had a strong sense of humor, of devilment and a sheer exuberant enjoyment of life. He would quickly become popular with virtually anyone with whom he came in contact.

F. W. Dyke, a Gallipoli original, recalled a rare occasion when his donkey was being obstinate. A Padre was standing waiting to accompany Simpson, but with all his coaxing the donkey wouldn’t move. At last Simpson turned to the Padre and said, “Padre, this old donkey has been tied up with some mules and has acquired some of their bad habits. Would you move along the beach a little way, as I’ll have to speak to him in Hindustani, and, Padre, I wouldn’t like you to think I was swearing at him.”
On another occasion he saw a figure moving in the bush and shouted, “Halt! there, who are ye?”
“I’m a warrant officer of the 3rd Field Engineers” came the response.
“Come out, then, and let’s have a look at ye” replied Simpson.
He examined the suspect and said bluntly “I don’t like the looks of ye.”
The warrant officer stared and said, “Don’t be foolish. I’ll report you. I’m making levels for the excavations for a new road here.”
“Maybe, maybe, but you’ll come down to the station with me all the same”
Upon arrival there, the warrant officer was identified.
Simpson commented, “Oh well, ” flicking the donkey as he spoke, “he’s dirty enough to be a Turk even if he isn’t one, isn’t he, Duffy?”
On May the 15th General Bridges set out on his daily excursion to see his men, accompanied by Colonel C.B.B. White and Lieutenant R.G. Casey*4. They took their way into Shrapnel Gully and on through Monash Valley. Bridges stopped to talk to the medical officer at the aid post. When he moved on he was mortally wounded. Lieutenant Casey recalled how Simpson came up to the dressing station soon after with his donkey.
Simpson made a friendly remark, “You’ll be all right, Dig. I wish they’d let me take you down to the beach on my donkey.”
Bridges had earlier told Captain Clive Thompson “Don’t have me carried down. I don’t want to endanger any of your stretcher-bearers.”
Simpson was frequently warned of the dangers he was facing. When Captain A. Lyle Buchanan took over as Simpson’s commanding officer he offically warned Simpson of the grave risks he was taking as the possible consequences of wounding “or worse”. Simpson’s reply was “my troubles” and he continued on with his work.

As E.C. Buley tells in his book ‘Glorious Deed of Australia in the Great War’, he sometimes even acted against orders.

When the enfilading fire down the valley was at its worst and orders were posted that the ambulance men must not go out, the Man and the Donkey continued placidly their work. At times they held trenches of hundreds of men spell-bound, just to see them at their work.
Their quarry lay motionless in an open patch, in easy range of a dozen Turkish rifles. Patiently the little donkey waited under cover, while the man crawled through the thick scrub until he was within striking distance. Then a lightning dash, and he had the wounded man on his back and was making for cover again. In those fierce seconds he always seemed to bear a charmed life.

Davidson said, “We covered his body and put it in a dugout beside the track and carried on with our job. We went back for him at about 6.30 p.m. and he was buried at Hell Spit*5 on the same evening.” Private Johnson made a simple wooden cross with the inscription “John Simpson”.
Chaplin-Colonel George Green (Church of England) officiated at the burial service.

One of the 1st Battalion missed him from the gully that day and asked “Where’s Murphy?” The Sergeant replied “Murphy’s at Heaven’s Gate, helping the soldiers through.”
That night there was a hush throughout the trenches when the news circulated that “the man with the donk” had finally “stopped one”. He had become such a part of life at ANZAC that it was hard for them to believe that he was gone.

Sapper Burrell told that when Simpson was shot, an artilleryman told Captain J.T. Evans, the Officer commanding the Indian Field ambulance, “Evans Sahib, what do you think? Murphy’s stonkered.” Evans did a thing which astonished all who knew him. He sat on a packing case and covered his face with his hands and prayed out aloud. “O God. if ever a man deserves Heaven, he does. Give it to him!”
The Indians gathered around and asked Evans what was wrong and when he told them Murphy Sahib had been killed they immediately went down on their haunches and wailed and threw dirt on their heads. “I never seen them show such sorrow for one of their own.” Sapper Burrell said. 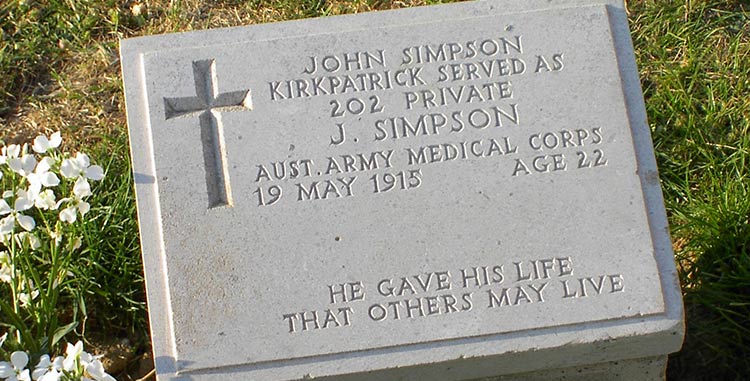